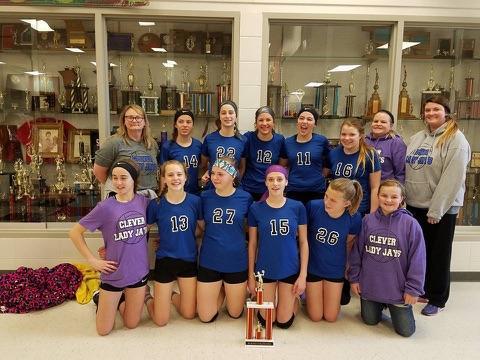 The Clever Junior High 2017 Volleyball  Team had a very exciting season with a record of 19-1. They also claimed the SWCL championship title and the southwest championship. They beat almost every team in two sets. Brandi Riley, Kendra Hancock, Shelby Volmert, Abbigail Vanzandt, Kendra Stewart, Kylie Wenger, and Kenna Wise are the teammates that contributed to all of these phenomenal wins.

Kendra Hancock described the season as, “Fun, but it went by too quickly. It was fun because it was a great bonding experience for the teammates.”

Brandi Riley said, “This season was lots of fun, and I will definitely remember it. It was amazing to see everyone improve throughout the season. Being one of the captains was a nice experience, and it was a great opportunity to better myself and others.”

Kenna Wise said, “The 8th graders will be missed. They bring a great deal of talent to our team. Next year we will have to step it up.”